Art has always been a part of Marika Langs life. She was born in an artist-family where the father, Yngve Johansson, was a painter and a skulpter. Mom Ruth, a trained actress, changed her line of work and became a teacher in drawings. Already at the age of seven Marika Lang participated in her first gathering-collection. She continued to draw under her fathers influense but also her fathers colleges gave her advice and help. Marikas career started with her painting traditional landscapes and later she moved on to both abstract and surrealistic motives that finally developed into her naive pictures where Marika has found her way of expressing herself.

When Marika started to work she also made her living as a teacher in drawings. Later she took time off to visit England where she met her husband. After two years they moved back to Sweden and Marika started to work at an art-gallery. 1990 she decided to only make her living by painting and has made her living that way ever since. Today Marika Land shares her life with the art and her family; her husband Eugene and their children Charles and Mollie. Naive artists can have a tendency to become stereotype in their pictures. Marika Lang has a sence of colour and a way of telling which is so vital, so filled with humour and joy that no painting is the other one alike. Marika Langs figures aren`t static but gives the painting that movement wich is recoired to be able to find a story in it. Marika believes that she build up her paintings the same way an author build up his novels. The people in my paintings first pop up in my imagination but when they take shape on the painting they each get their own background and history. I don`t paint to preform a deaper sence. I paint ordinary people who dances, goes shopping, swims, goes to the pub, enjoyes, desires, dreams etc. You can find no messages to analyse. The only thing I want to bring forward is joy. 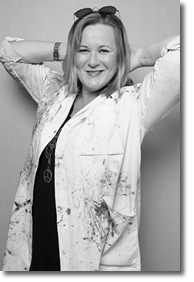